The Advantages and Risks of Slimming

The problem lies in a perceptual error.

You see, the symptom is not the problem but our whole cultural training has taught that it is.

This is why there is so much chronic and “incurable” disease; so much poverty; so much dissatisfaction and so much exploitation due to ignorance of what the real problems are.

If we truly want to solve problems then we must re-educate ourselves to look beyond the symptoms (the effects) and identify the cause(s). Once done, we are then in a position of being able to remove from our lives that which is causing our misery.

Whether your overweight symptom is only being able to see parts of your body in a mirror, clothes that won’t fit on the ironing board or simply not being able to fasten your shoes and breathe at the same time it didn’t “just happen”; something CAUSED it and it wasn’t eating too much!

Dependent upon your point of view, either “we” have evolved to participate in a simultaneously evolved planet-wide recycling system or “The Causational Intelligence” has designed the world to recycle everything.

What this means is that the waste residues from that which we eat and our metabolism are sustenance and nutrition for a wide variety of other life forms; insects, fungi and bacteria. These consume that which our bodies eject and their own wastes become nutrition for the plants which we eat (simplified version).

The problem is that, since the time of the First World War, when women were called up to work the factories and offices, we have been ever more schooled into consuming “convenience” foods, i.e. partially pre-digested in some factory.

What we are not told is that the artificial “pre-digestion” makes much of these “foodstuffs” unrecognisable for our digestive systems. Worse still, we are not told that this process begins the natural recycling and billions of microbes rush in to to make fertiliser out of it. To slow this process down, poisons (called preservatives because it sounds “friendlier”) are added to these factory products. These poisons, of course, remain in there and, at least partially, prevent our bodies digesting the “foodstuffs”.

This gives your body a big problem:-

Your body gets gradually filled up with “foods” that it can neither properly digest nor easily eject and metabolic wastes that it cannot properly discharge. So what is it going to do?

The first thing that it does is to store that which it cannot readily digest into the walls of your intestines; the intent being to process it later – if it can.
If it can’t then one of two things will happen:-

a) your body will move these residues to a “safe storage” under your skin and build up a thick fat layer to insulate this semi-toxic material from the rest of your body. As more residues build up, the fat layers get thicker.

b) these residues will be distributed around your body which will, then, take up enormous amounts of additional water to keep the concentration of the toxins below critical damage level.

Additionally, your body may eject some of the toxins through your skin which is the prime source of rough, blotchy and wrinkled skin.

Other commonly used methods of dealing with this include cancer whose meteoric “rise to fame” exactly parallels the rise in consumption of processed “foods”. See this book for details.

This is why it can be so dangerous to use chemicals which force your body to eject fat and/or water: By removing this insulation, you force your body to set the stored toxins free and you could submit yourself to a toxic shock which will certainly be uncomfortable and can be lethal! If you survive it, your body will then rapidly re-build the “insulation” which is why so many “diets” seem to fail.

The solution, of course, is to remove the cause: If the toxic residues are no longer present then your body will rapidly discharge the “insulation” for which it has no further use. To avoid a repeat, it is wisest to switch to fresh foods only which you yourself prepare and are organically grown. This way, you avoid the toxins from processed “foods” re-building.

Gently removing the stored toxins is something to which the world-renowned German toxicologist, Dr. Uwe Häcker – a former advisor to the World Health Organisation – has devoted some years of study. He has developed a product which does that which, literally, everybody needs: It gently removes toxins from your body so that it can properly regenerate itself. 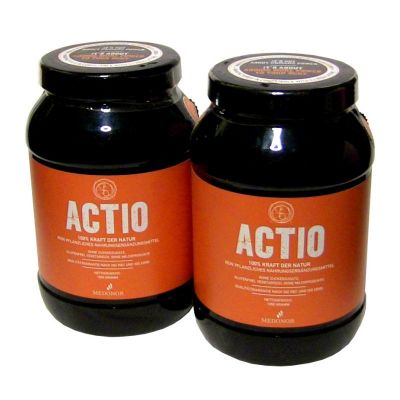 The way in which “Actio” works is by pulling out the residues stored in the walls of your intestines and binding them which then enables your body to naturally remove them into the toilet. This sets up a reverse process by which the toxins which have been stored elsewhere are pulled back into your intestines where Actio will, again pull them out and bind them so that your body will naturally remove them.

Once the level of stored toxic residues has been significantly reduced, your body will naturally begin to dismantle whatever tools it had built up to protect itself; your overweight begins to disappear, your skin gets smoother and fresher. Even your thoughts will become clearer as your brain and your blood become toxin free. Whatever your state of health, it can only get better when your body becomes toxin-free.

Each human being is totally unique and so it is impossible to state exactly what you will experience. Typically, however, during the first month, you will notice your body discharging a lot of useless material. These are the stored toxins. During the second month, as yet more stored toxins are removed, the excess weight begins to disappear. Following the third month, we must hope that dressmakers and tailors will be allowed to open their doors once again as your trousers and dresses will need to be taken in.

Younger people who don’t, yet, have much excess weight will find that their skin becomes much smoother and will smell much better as toxins stored under the skin are removed.

How long you will need Actio depends upon how much “excess storage” needs to be removed. In most cases, three months will suffice but some may take five!

A “refresher” month once per year is also very wise.

N.B. Actio can only be delivered within Europe or to countries which accept and recognise European health certificates. Unfortunately, the USA does not accept these even though the EU's standard is higher than the FDA's.