WHO press conference to which I was invited

On this coming Sunday, 26th April, the first of the New Moon Seminars to be held in English will begin online. Although there are a few things which cannot be done online, the first experiment at the March New Moon (in German) proved to be most effective.

The two purposes of these seminars is to put a collection of very powerful tools into your hands and, for those who wish to help spread this knowledge, to help you to teach and to awaken these abilities in others.

Full details of the seminar which stretches over Sunday (whole day) Tuesday 28th (3 hours) and Thursday 30th (1 ½ hours) together with time zones and registration are on this webpage.

Not only the USA, but also in Germany, official government figures show that there is no health emergency!

Just yesterday, the German government department of statistics released a graph showing the overall death rate in comparison to earlier years. Please click on the picture to see the graph in large format.

You will observe that, not only is there no real variance from normal annual death rates, but that also this year is considerable LOWER in the high-risk group aged 65+ than in 2018. Did we have a world pandemic then? I don't recall one, do you?

The full graph, which you can download here, goes back to 2016 but, with so many lines on it, it can appear a little confusing.

At 10.00 a.m., London time, Thursday 16th April, a press conference was given by the WHO Europe to which ExtremNews, Germany was invited. As the conference was held in English, they asked me to participate on their behalf. This is my report:

In general I must "congratulate" the WHO for, other than when "answering" my question, studiously avoiding giving misleading information. This they achieved by avoiding giving any information at all: Instead they confined themselves to vague platitudes.

"We will continue to monitor the situation." "Our sympathies go out to those hurt by this necessary action." "We cannot give any answers until we've tested the data." Etc., etc..

Two of the speakers, Dr. Hans Kluge and Natasha Azzopardi Muscat actually managed to say nothing. They spoke at some length with high-sounding words devoid of context and meaning. When this "noise" was filtered out, neither of them had said anything at all!

The other, Catherine Smallwood, was not quite so well-schooled as the others and almost attempted to answer my question with a bare faced lie before she continued with the platitudes.

It did seem to me very obvious that the invited journalists had been carefully selected, almost all of them coming from the pharmaceutical owned press. They were not expecting my question which almost flummoxed Mistress Smallwood into saying something. I suspect that ExtremNews will not be invited again.

(Instead, we received an amazing invitation - see end of this section)

There were my questions:-

1: In view of the fact that you have many times called a pandemic when none existed and you have never shown a causational connection between a putative ‘flu Virus (which you have twice renamed and now call Sars-CoV-2) but only a circumstantial connection combined with the fact that the death figures in total are well within the normal range; when are you going to abandon this farce and call off the fraudulent pandemic?

2: Who has given orders to health authorities in Italy and New York especially to artificially inflate death numbers and why?

3: Who has given orders to claim that empty hospitals around the world are filled to overflowing and why?

In points 2 & 3, I am asking for the names to facilitate criminal prosecutions.

Of course, numbers 2 and 3 were completely ignored as was most of question 1. The only "answer" given hereto was the completely false claim that corona viruses are not 'flu viruses but something completely different! Even that bastion of evil, the Robert Koch Institute in Berlin, states incontrovertibly that the corona viruses have been known to be a mild form of 'flu for more than 50 years.

One question, posed by Tom Manger, was mildly amusing. It concerns Bonfire Night which is celebrated on the 5th November each year. Now, I do think that I am correct when I claim that Britain is the only country in the world which, as its greatest national festival, celebrates a failure: The failure, in 1605 to get rid of a great number of politicians.

This year we have been "asked" not to celebrate this festival!

The "answer" which Tom got was, of course, further vague and meaningless platitudes.

At 10.59, the zoom connection collapsed and could not be reinstated.

Just before I woke up that morning I had an interesting dream:-

For reasons which I no longer remember, my car wouldn't start and so I had to walk across town to a whole food shop which, in the dream, was owned by a long-time friend (who was an accountant but has now been retired for 2 years).

When I got there, the naughty people had just been there and, "as an infection prevention measure" had confiscated all of his beer.

He lent me a vehicle to get back home.
It was some weird Heath-Robinson affair with aspects of a Renault Espace, Toyota Hilux and Saracen armoured car plus a few other bits. He also gave me a bodyguard who was so big that I had to ask him to move his seat back, otherwise I couldn't see out of the left window. (British cars, for our former "colonials" across The Pond, have their steering wheels on the other side, as is right.)

I drove down to the main road and turned right to get to the Shell petrol (Am: Gas) station.

When we got there, as an "infection prevention measure" they had dug up the forecourt and were in the process of removing all cables and pipework whilst primary school children were playing in the rubble.

Then I woke up.

The content of the dream is an example of what happens when you give a bureaucrat authority with no personal responsibility. He/she will use it just to prove that they should have such authority. Thus were most of the world's cruellest dictatorships created.

On the following day, we were asked to re-submit our questions in writing so that full answers could be given. In order to cicumvent "cop-out" answers, I prepared a very detailed explanation which runs to seven pages! You can download this as a .pdf here. Please forward on to everyone that you know.

How they make a clown out of you 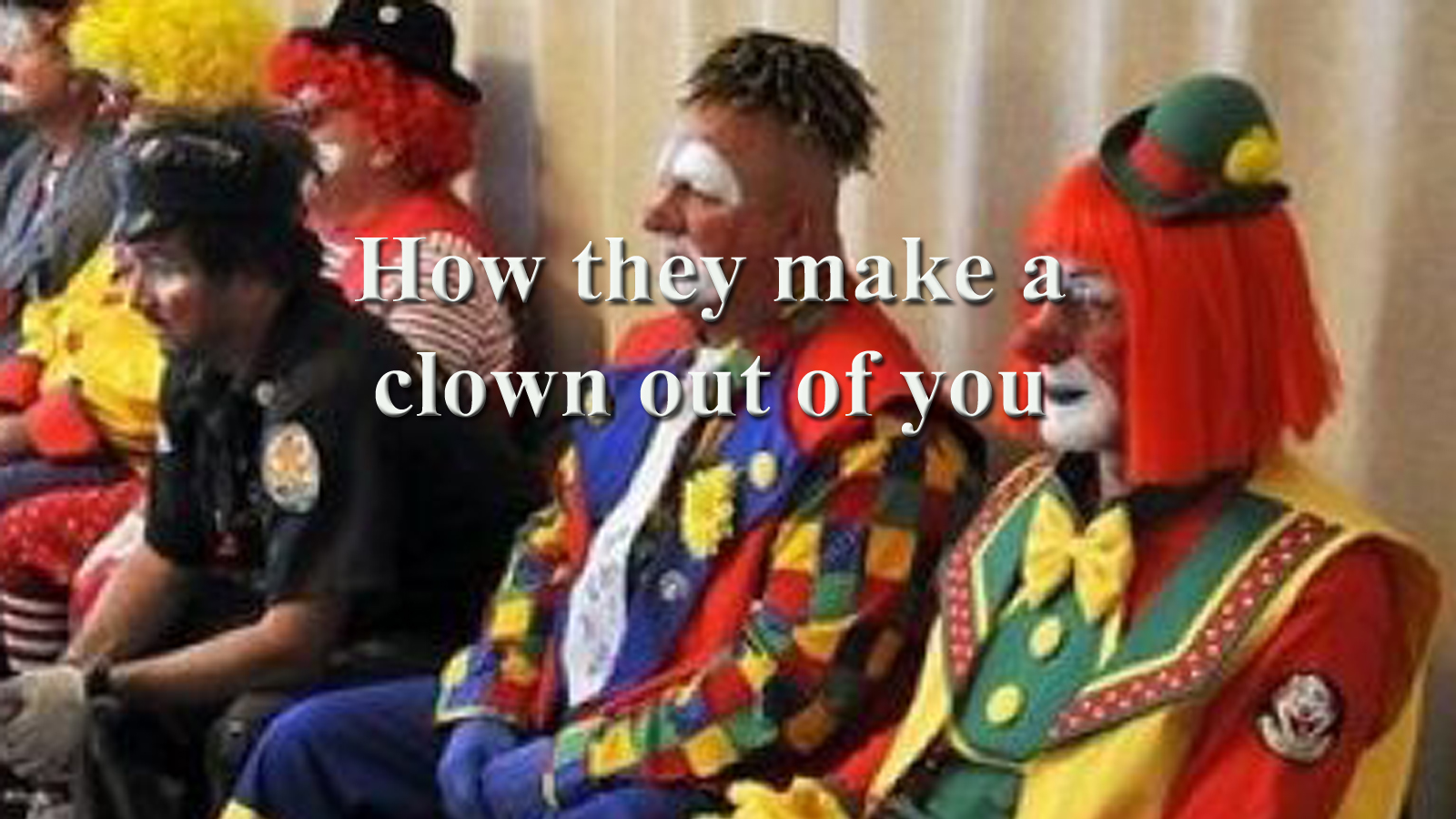 After publishing this video, I was handed a document from the Technical University in Munich, Germany. This contains the results of a detailed study regarding the use of surgical masks. The study shows them to be very damaging for the health of lungs, mouth and nasal cavity as well as causing oxygen defficiency in the brain. I will translate relevant extract from it during the next few days and publish them in a newsletter.

What we should be doing instead 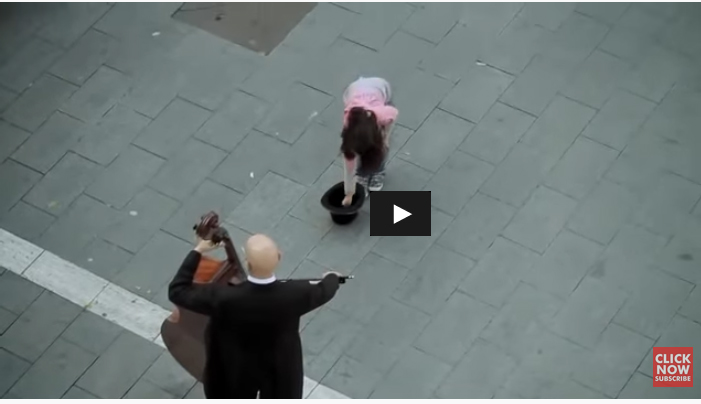