A change of scenery
The Way of the World   (Where are the bodies?)
The two-edged sword

A change of scenery

Just less than one week ago, acting upon advice which turned out to be most unreliable, some friends drove me some 300 km to what should have been an innovative clinic where my lungs and heart would be completely healed.

Instead, I ended up being an emergency admission to a normal hospital which confirmed the pulmonary fibrosis diagnosis and then, because pharmaceutical medicine classes this as "incurable", held me there for a further five days whilst refusing all treatment and then, unceremoniously, threw me onto the streets (literally!) when I tried to get a transfer to a clinic which did appear to offer some help with this malady.

Then the gods smiled upon me again and, with mild hypothermia (last Monday evening was very cold and wet), I was brought into the last available room in a nursing home.
What a difference: Staff who actually care about the people they look after, food of an edible standard, internet and telephone function so I'm no longer "incommunicado".

Although it's relatively expensive, it seems that the British National Health Service may pick up most of the bill and so it's not even going to bankrupt me. I hope to have full confirmation of this by Tuesday this week.

The other very important factor is that pulmonary fibrosis is not "incurable", it's just that you can't do it with pharmaceutical medicine.

Pulmonary fibrosis is when extremely damaging filaments of, for example, glass-fibre, rock-wool, asbestos or similar get into the lungs. The lung tissues react to protect themselves by encapsulating these fibres in special tissues which hold the filaments where they are and, thus, prevent further damage. The problem lies is getting rid of both filaments and encapsulating tissues: More on this later when the work begins.

The Way of the World

For many, the present "world emergency" has gone beyond the point of no return. What drives it further is not, of course, facts of any sort but the belief in "facts" which simply do not exist. One of these is the belief that people who don't permit themselves to be "vaccinated" are, thereby, capable of giving me a fell disease yet, no matter in which way you look at this, it is obvious nonsense.
"Why is it," we ask but are not answered, "that more than 90% of those who become "infected" with "variants" and "mutations" are precisely those who had taken the "vaccine"?"
https://principia-scientific.com/israel-proves-vaccinations-cause-covid/?utm_source=feedburner&utm_medium=email&utm_campaign=Feed%3A+psintl+%28Principia+Scientific+Intl+-+Latest+News%29

If we are to believe official figures, the "vaccines" have already killed more than twice as many people as those, it is claimed, have been killed by "Covid-19". In point of fact, the little real evidence that we have indicates that the ratio of vaccine to Covid-19 deaths may well be in the area of hundreds to one.
https://www.harmonyenergyconsultants.com/web/en/portugal-2.html

The evidence for any Covid-19 deaths at all is so very vague and sketchy that it screams for an answer to the question, "Where are the bodies?" The world death rates (all causes) for 2019 and 2020, correct to three decimal places, are absolutely identical! Burial and cremation rates also do not evidence increases. 2020 and 2021 sees these trends continuing. So, again, we pose the question:

WHERE ARE THE BODIES??

Time and again, we hear, "I know that Covid-19 is real because my (relative) (the relative of a friend) died of it."
But do you KNOW this? How do you "know" this? Is it because some bureaucrat has told you this or did you carry out an autopsy yourself? Are you capable of differentiating between Covid-19 and the 'flu? Are you even aware of the fact that the symptoms, progress, prognosis and morbidity of "Covid-19" and the 'flu are absolutely identical? Are you in possession of any evidence showing that there is a difference between the 'flu and Covid-19? If you are, then you may be unique for we have searched for but have not seen any such evidence!

History teaches us that, with a very few exceptions, all disasters wrought by the hand of man have been the effects of mass beliefs which have no basis in fact. Control the belief and you control humanity! This is why, from the 1920's onwards, Rockefeller and friends have made such an all-out effort to gain control of the press that they now own more than 95% of it. The effect of this is that, even today, the propaganda which generated the First World War finds much less acceptance than that which generated World War II. The tossed coin spins in the air and the face of truth comes more and more often to the light. Although belief in the Covid-19 fairy tale is still very wide-spread, the numbers of experts in all aspects of this so-called "pandemic" who are now saying, "Hold on there; something doesn't ad up here." is well into the millions and growing daily.

Right now we have the situation in which many countries are lifting all "Covid-19" restrictions whilst others, such as Germany, are attempting to seal themselves off from the rest of the world.

Where is the scientific consensus we ask? Is there any science at all to back up the "pandemic" claims? We have diligently sought such but have not found any!

Coming soon:
"To escape this Trap, follow those who did not know the Way"

Most people suffer from such beliefs because that is the way we've been trained in our "education" and religious systems.

Today, I want to give you a gift but it is a two edged sword; if you try to abuse it, it will bite you! If you use it properly it will amaze you.

It is so long since I last used this myself that I had actually forgotten about it.
As things are now, with the bankers rushing us all into poverty, this can be a very useful tool for almost everyone.

It is a way of purchasing everything that you want without actually paying for anything! Nonetheless, everyone will be happy.

Now to the double edged sword that I place into your hands:

There are four simple steps to this and each one must be followed exactly.

1) You ARE the manager(ess) of a business. You may not think so at the moment but take a closer look. You have customers (your employers) and you have suppliers (your landlord, supermarket, etc., etc.). In your business, you try to keep these more or less in balance so that your business costs (your suppliers) do not exceed your income.
Do you now see what I mean?
Those of us who have commercial undertakings, i.e. the sale of goods and/or services to multiple customers are, perhaps, more aware of this but, in truth, there is little difference other that the fact that you might have only one customer (your employer) and commercial undertakings normally have many customers.
So, visualise yourself sitting at your business desk (it can be totally imaginary as we're dealing here with energy flows and not material objects). If, however, you do have a desk at which you habitually do your writing, sorting bills etc., then you should use that desk!

2) For the the purpose of this exercise, decide to give €50,- (for example) to a charity of your choice - or simply to give it to a friend. Take this to yourself as a debt of honour and then place it on the front left hand corner of your business desk. It is essential that you feel honour and thankfulness that you have irrevocably given this sum. Front left is the corner furthest from you on your left as you sit.

3) On the right front corner of your desk clear a space and say to the universe, "Now please give me the wherewithal to pay this." Then leave your desk and go about your normal daily affairs.

4) This is normally, very fast acting and, for such a small sum, may well materialise the same day.
Note, however, the sum you receive will ALWAYS be much larger than the sum you have irrevocably decided to give.

Point 2 is the crunch; if you hold back or try to make it conditional. e.g. "give me the money first and then I'll pay it" the very BEST that could happen to you is nothing. More likely is a loss because you will have betrayed your honour.

You will find that this also works for other things as well.
New cars will take a little longer because YOU think that the amount of money is more difficult! It isn't but only experience will teach you this.

One very, very important point is never, ever, try to think out where the money is going to come from. If you do this, you restrict the possibilities and slow things down. Just let the conscious universe do it - its job is to select the quickest and easiest way.
For example:-
1978 I was sent by my then employers to an exhibition in Cologne. I could afford very little for entertainment. On the first evening, after the show I was strolling around and noticed something pink on the ground on the other side of the street. It was raining and people were just hurrying by without noticing it. I went across the road and, to my amazement, picked up a DM500.00 bank note.
A merry evening was had by all! 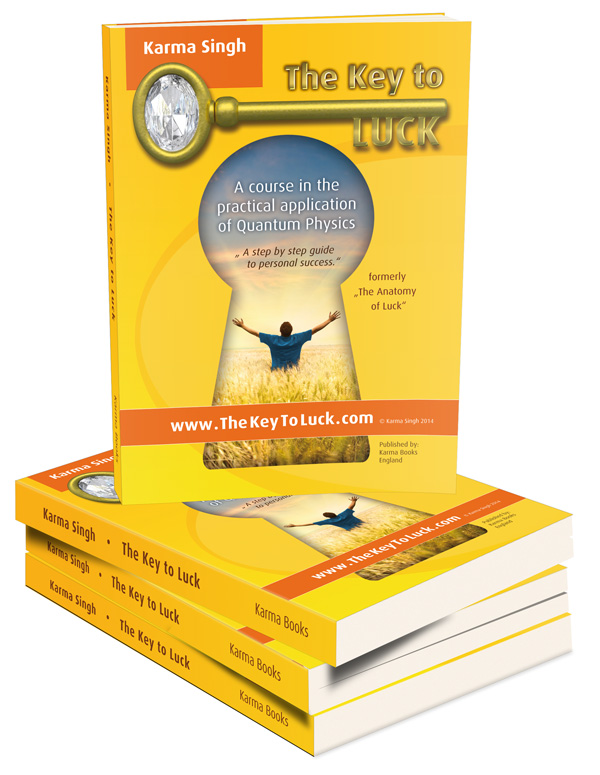 This is a more advanced technique than those in the handbook for those wishing to learn about such matters, i.e. "The Key to Luck" https://www.keytoluck.com
The techniques in the book will not bite back if you don't follow the instructions exactly, they just won't work.

As matters progress with the bankers' programme to create a new feudal society with you and me as their serf property, it will be essential to expand the use of such techniques which neutralise their efforts.
As I have been saying for years, the most effective way is to stop using their "money".
We have two completely different "monies" of our own and there is also the possibility for everyone to become so wealthy that no money is needed at all!

More on these themes as quickly as I can manage them.

"The person who says it cannot be done should not interrupt the person doing it."