This Newsletter has four topics:

On this Sunday night / Monday early morning, 20th to 21st January, a lunar total eclipse is to happen.

This is, apparently, one of the famous or notorious “Blood Moons” when the moon can appear to be coloured red. According to many legends these eclipses awaken latent abilities which can then be used for either “good” or “evil” as you so choose.

Your choice brings with it, however, reactions and responses which you may or may not enjoy so choose wisely.

The times are in this table:- (European times are for Monday early morning)

With the January weather so far in Northern Europe, it is unlikely that the eclipse can be seen from the ground. From here in Africa, our prospects are much better and I hope to be able to film at least a part of it.
The effects of a lunar eclipse are, however, in no way diminished by thick cloud - gravity waves go straight through them.

You may recall from a couple of days ago the extortionate price increase imposed by Deutsche Post for deliveries outside Germany.

We have our main dispatch in Germany and these price increases go way beyond any reasonable action - let me just remind you:-

Last year, I could send 2 books or 4 DVDs for €3.70. Now, one book or DVD costs around €22.50 because, not only do I have to pay exorbitant postage but I also have to pack it in a carton with a minimal size which, then, necessitates buying filling material (which you have to dispose of!) to prevent the book etc. being damaged by moving about inside the box.

We are, of course looking at alternative carriers who are, now, all much cheaper than Deutsche Post but still represent a very significant cost increase and a single book or DVD will cost around €13.00 to send.

The way to negate this profiteering by Deutsche Post abusing their monopoly position is by community action - something which is an inevitable, growing way of life in this changeover from the Age of Materialism (the patriarchy) into the Age of Community in which we now find ourselves.

If, instead of everyone ordering their personal DVD or book, collective orders were made for a larger number of items wanted by several people close to each other, then, instead of being ripped off by Deutsche Post, the cost of delivery could even be reduced!

Take this example:- Last year, sending four DVDs to four people in Vienna or New York would cost €14.80 for the postage stamps and €3.20 for the packaging. This year, that would now cost €90.00 with Deutsche Post.

If, however, these four people were to join together and make one purchase of four DVDs or books then the cost drops to about €13.00 to €15.50 in total, i.e. each of these four people pays around €3 - €4 instead of the €4.50 they would have paid last year and Deutsche Post gets absolutely nothing; just as they deserve.

I leave this matter in your hands.

Bayer AG, the pharmaceutical giant which recently purchased “the most evil corporation on the planet” - Monsanto - and found themselves presented with a bill for hundreds of millions in damages which Monsanto had perpetrated upon the public for many decades has now begun a propaganda campaign demanding that homoeopathy be banned as this detracts from their profits on pharmaceutical sales.

Homoeopathy, however, is the ultimate refinement of and the most advanced form of medicine available. What Samuel Hahnemann and his successors have done is to separate the active part of medications from the poisonous chemical carriers.

Pharmaceutical profits, on the other hand, are upon the poisonous chemical carriers not upon the functioning part.

We must bear in mind that the pharmaceutical cartel members started out as chemical manufacturers and simply adapted their products to inject into people and animals. 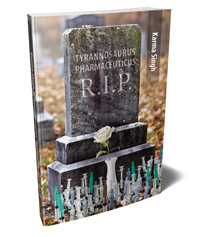 There is an article upon the Bolen Report which will provide you with much more information.

You may also wish to purchase my latest book “Tyrannosaurus Pharmaceuticus R.I.P.” which shows conclusively just why conventional medicine is totally useless and with what it should be replaced.
At the moment, due to the postal situation, I would recommend purchasing the e-book, download version.

I have already been asked many times where my New Year’s Broadcast for 2019 is.

Well, I had to wait for some things to unfold such as the prosecution of pharmaceutical cartel members for crimes against humanity, the scientific collapse of the Global warming / Climate Change scam and a couple of other things which are still “cooking under”.

It may well be February before sufficient has been exposed to show what is happening and what we can do about it.

For each of the "elite" who wishes to maintain the system of exploitation, there are now more than NINE THOUSAND of us!