This announcement by the Climate Change Mafia is in many ways misleading.

Firstly, fossil fuel burning contributes only around six percent of all CO2, i.e. 0.00249% of the air.

Secondly, the position of the test station from which they have the readings which they quote is on the side of an active volcano sitting in a warming ocean.

- The second largest producers of atmospheric CO2 are the volcanoes. In this case, the CO2 rolls over the lip of the volcano and, being heavier than air, rolls down into the waiting arms of the Climate Change Mafia.

- The oceans are the largest producers of atmospheric CO2 which they absorb when the water is cold and then give off when the water is warmer. Ocean currents carry cold water into this region where it is warmed up by volcanic activity. Additionally, the “El Nino” cycle is presently pushing warmer water into the area.

- It is scientifically incontrovertible that CO2 in the air MUST be very much higher on the side of an active volcano sitting in a warming ocean than elsewhere. This is why data from this station is used rather than data from an area where typical levels would occur.

Thirdly, the small increase in atmospheric CO2 which has occurred over the last few decades has resulted in a dramatic expansion of green plant growth (up to 50% in some areas).

NASA scientists report that 70% of the increased plant growth is due to the greater availability of that essential plant nutrient CO2! The slight increase in world temperature since the 1970s, due to increased activity of the Sun, has helped to further this process.

Nonetheless, CO2 levels are still not ideal, way below the levels earlier in Earth’s history and many large-scale “greenhouse farmers” still purchase compressed CO2 which they add to the air in their greenhouses as this increases plant growth and harvests very significantly. For the same reason, many hobby greenhouse horticulturalists regularly burn paper in their greenhouses.

We note from their graph heading the Science Alert page that, according to them, CO2 has been steadily rising since 1958 yet, for the first two decades covered by their graph, world temperatures were falling. Present trends show that the temperature has never again reached the high of 1999 and has been falling since 2010.

Further down in the same article we see a graph which they have prepared based upon ice core samples from an extremely stable part of the world (Greenland) for the last 10,000 years, i.e. since the end of the last Ice Age. At the beginning of their graph, world temperatures rose dramatically, causing the melting of the miles thick ice lying across much of the present land masses, resulting in a rise in sea levels of around 130 metres (426 feet). This melt inundated many legendary cities some of which, in recent years, have been found in waters presently 70 to 90 metres (230 to 300 feet) deep.

The “Little Ice Age” began in around 1300 AD, ended in about 1870 when the Earth began slowly to warm up again as solar activity increased. Throughout this whole period of ten thousand years, from the end of the last Ice Age, CO2 levels remained constant thus showing incontrovertibly that there is zero correlation between increasing CO2 availability in the air and world temperatures. 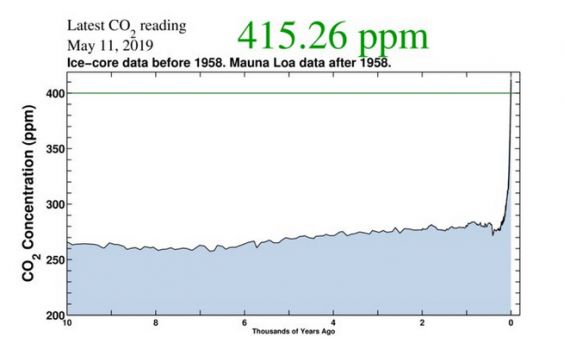 It is precisely for this reason that CO2 sampling was moved from a geologically stable position to an extremely unstable one where CO2 levels are bound to be especially, but only locally, high. Failing this, the “man-made climate change by increased burning of fossil fuels fairy tale” was in imminent danger of collapse as more people ask, ”Where is this CO2?”

Overall, we must hope that what we are presently experiencing, i.e. a slow and somewhat erratic climb out of The Little Ice Age continues and a new Ice Age which, according to geologists is “overdue”, continues.

Interestingly, in the 1960s, as the world was getting gradually colder (despite, please note, the massive increase in man-made CO2 since the 1940s) a Swedish scientist suggested that we might be able to stave off a new Ice Age if we could build up CO2 levels to the point where their “greenhouse effect” would prevent the temperature plunge. Present CO2 levels, natural and otherwise, are nowhere near the levels needed to test his hypothesis!

We must also not lose sight of the fact that the temperature changes which have been measured during the last three decades are all in fractions of one degree. Being accustomed to daily temperature changes of up to twenty degrees, the variations being talked about by the Climate Change Mafia are, generally, below the threshold that humans can perceive.

Should the recovery from The Little Ice Age continue (and there is no valid scientific reason to believe that it will go one way rather than the other) then history shows us that we are to expect a period of greater comfort and prosperity for all giving rise to more free time for self-development and creative thought and it is this latter that the bankers who are behind the Climate Change Mafia seek to prevent as it will inevitably lead to the demise of the greatest fraud ever perpetrated - the banking system.

This article can be downloaded as a .pdf for Distribution by clicking this link.

The 18 Points which demolish the "Climate Change" lie can be downloaded here: