This coming Sunday
Crimes against Humanity

On this day, it is planned to give the next Light Pillar of Life Connection Seminar online.

At this moment, there are too few registrants for it to take place. At least a further 5 people must choose to make this great step forward before the planned seminar can take place.

Direct to the registration page here:-

Those of us whose memory goes back further than the last propaganda broadcast from the BBC, will recall that, when this whole hoohoorah "hit the streets", in February 2020, the only part of the German Bundestag who weren't prepared for it were the AfD (Alternative for Deutschland) MPs. Some may well have asked themselves why.

The answer is relatively simple; they were not included in the plot! They did not know what was going on nor why such extreme and unusual life restrictions were being imposed upon the German people.

Some will remember how, in October 2019, the Merkel interfered in the elections in Thüringen to have the democratically elected Land President deposed and replaced with her own "Gauleiter" who did know what was expected of him to terrorise the people of Thüringen.

Just how long this has been planned is still unclear. There is proof that parts of the plan were implemented by the WHO in 2009. Other traces indicate that it may well go back to 2003 or even earlier. Hard facts are not that easy to come by but those paying attention will have noticed that the government of Bavaria created a special Covid contingency fund in May of 2019 - almost a whole year before the plan went public and five months before the practice session in October 2019 involving the pharmaceutical cartel, the eugenicists (Bill Gates and friends) Google, Facebook, the main stream press and many government figures from around the world.

So, why was the AfD the only political party which, clearly, had not been informed?

Simple, really; the origin of the AfD is a breakaway from the political parties owned and controlled by the bankers. They are the only major political force which works for the German people instead.
Similarly, in the USA, most Democrat Politicians knew all about it in advance but the Trump administration was caught unawares and had to react without really knowing what was happening.

Confronted by that most unusual of presences in our modern world - an honest political party - the Merkel & Co. have employed the only tactic available to them of black propaganda. Picking up on God knows what snippet of speeches, they have, quite successfully, managed to convince the public that the AfD is severely infiltrated by Nazi philosophy. Now, as with all other philosophies, it is neither all good nor all bad. It was, for example, a part of it that German artisans would never become just biological parts of some faceless automated production line but be recognised as highly skilled workers who create products from start to finish. Only the greed of the bankers could find fault with this, and so they did.
Similarly, in America, black propaganda instead of truth was used in the attempt to denigrate the achievements of the Trump administration.
Let us, however, look at this as reasoning human beings: When someone holds views that you believe to be non-functional, what is the best course of action? Do you make it illegal to express their opinions or do you seek to change them through reasoned discussion? The Merkel and its bosses chose the first option (one which history shows us never works) and the AfD chose the other. Which one best serves the German people? Again, history shows us that reasoned discussion always ensures peace and order.

In Brandenburg, where the AfD has sufficient clout to push through necessary action, they have been running a special public investigation into the whole Covid scare: This is something that the German government is obligated to do but has refused. The investigation in Brandenburg, including the interrogation of the veterinarian, Dr. Wieler, the head of the Robert Koch Institute (rough equivalent of SAGE or CDC), "Professor" Drosten and others has brought some very interesting facts to the light.
When asked from where he obtained his figures, Dr. Wieler declared that he was given them and just followed orders to publish them as though they were the results of some scientific investigation.
"Professor" Drosten denied all knowledge when asked why he declared a new deadly disease with no scientific data to back it up. It seems, therefore, obvious, that there is no scientific evidence whatsoever to back up the pandemic story and that the whole thing was created by Merkel & Co. etc. at the behest of the bankers.

A few days ago, following the declaration from the RKI that no Covid cases could be found in Germany, AfD MPs asked the Merkel when all of the restrictions upon the German people would be lifted. The Merkel's reply is most edifying as you can see in this video here in which she declared an intent to commit several criminal acts. These I have commented below the video. 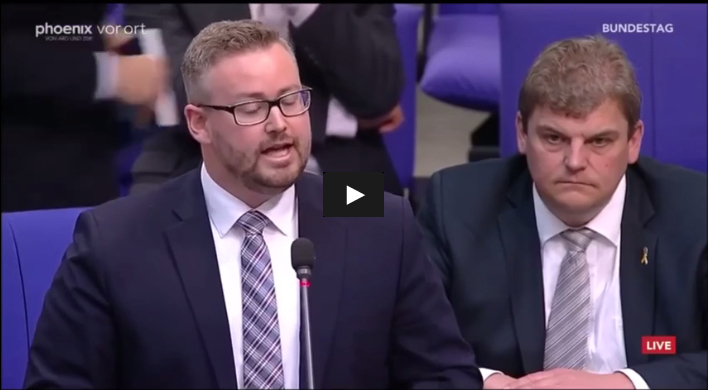 1:00 We must expect variation of the virus until everyone in the world has been "vaccinated".

A large part of this con job is the "failure" to mention that no Covid-19 "virus" has ever been found and that the so-called "tests" are for the presence of a micro-protein which appears naturally, seventy four times in the human genome.
Of course, we see clearly why both the inventor of PCR, Dr. Kerry Mullis PhD., and all manufacturers state that it should never be used for diagnostic purposes. The majority of "tests" are "negative", i.e. they fail to detect that which is always there.
This micro-protein, first discovered in 2004, was re-named SARS-Cov-2 especially for this plandemic to make it sound dangerous. This self-same micro-protein has been found in the genome of over 100 species of bacteria, sheep, goats, lions, mink and even a papaya!
It is so widespread that it is a safe assumption that most, if not all mammals use it to build their cells.
Epigenetics teaches us that our cells are constantly creating new protein variants by copying parts of our DNA and then modifying the copy in the attempt to better deal with changes in their environment. This also happens with SARS-COV-2. The so-called "Delta" variant appears, apparently, exclusively in people who have received the pseudo-vaccine. We must assume, therefore, that this "variant" is an attempt to deal with the highly toxic brew which is being pushed as a vaccine.

What? Have they changed the name of this harmless micro-protein once again?

2:15 Each PCR test comes with a CT value which states how infectious that person is.

This is completely new. The CT value is nothing more than a declaration of how many cycles the PRC duplication has been carried out. Although it has always been known that 30 duplications is the maximal which would give reliable results, for most of the plandemic, 40 to 45 replications have been used. This has recently been reduced to 25 by the WHO to make it appear that the vaccines were actually doing something useful. (Lower replications reduces the incidence of "false positives".) Studies carried out under the auspices of the WHO show clearly that symptom-free people are never infectious, irrespective of how many times the fraudulent "tests" replication cycles had been used.

3:35 A text from a Professor Stang is then shown:
As this rests upon several misconceptions, it should be considered meaningless.

4:06 PCR is an excellent indicator of whether someone is ill

As Dr, Mullis, who received a Nobel prize for inventing the Polymerase Chain Reaction, has clearly stated: PCR is not a diagnostic tool and is incapable of making any such indication.
Additionally, a few months ago, Elon Musk took four PCR tests on one day; two came back positive and two negative. He has never had any such related illness.

4:45 A text from Bayerische Rundfunk is then shown.

In the aftermath of World War II, 16 doctors who had been carrying out forced procedures upon the captives in the concentration camps were put on trial at the Nürnberg War Crimes Tribunal. Seven of them were hanged.
This established many precedents which have become enshrined in international law. They have, for some inexplicable reason, never been built into German law but, as International Law takes precedence, the effect is that they are the highest law in Germany as well as in the United Kingdom.

The first of these is the International Covenant on Civil and Political Rights.
Article 7 specifically forbids subjecting anyone to medical or scientific experimentation without their free and informed consent.

Then we come to the Convention for the Protection of Human Rights and Dignity of the Human Being with regard to the Application of Biology and Medicine.
Article 5 states "An intervention in the health field may only be carried out after the person concerned has given free and informed consent to it."

Universal Declaration on Human Genome and Human Rights article 6.1 is our next law.
"Any ....... medical intervention is only to be carried out with the prior, free and informed consent based on adequate information."

Slightly lower down the scale is the Parliamentary Assembly of the Council of Europe (2021) resolution 2361, 7.3.2.
"Ensure that no-one is discriminated against for not having been vaccinated due to ...... not wanting to be vaccinated."

Still lower down the scale is the World Medical Association International Code of Medical Ethics.
"A physician shall respect a competent patient's right to accept or to refuse treatment."

The Medical Protection Society states the following:-
"Respect for patients' autonomy is expressed in consent law; to impose care or treatment on people without respecting their wishes and right to self determination is not only unethical but illegal."
No particular law is quoted here but the phrase "right to self determination" appears in the UN Convention on Human Rights as well as in the European version.


There are many aspects which need to be borne in mind here:
1) All, and I do mean ALL evidence over a period of more than 200 years shows incontrovertibly that the only known effect of vaccination is to SPREAD disease! The claims that it prevents such are, inarguably, untrue. See the book, "Tyrannosaurus Pharmaceuticus R.I.P." https://www.tprip.com for full details and further references.
2) The claims that these pseudo vaccines have not been safety tested on animals are untrue: They have been and all of the animals died; that's why the tests were hidden.
3) Claims that they prevent Covid-19 are very far fetched to say the least and the practical experience has shown that those who have taken it are MORE susceptible to infection.
4) These substances are called "vaccines" purely for financial reasons; one of the actions which participating governments were required by the bankers to complete is to pass legislation exempting vaccine manufacturers from all civil and criminal liability for vaccines. These substances, however, have no similarity to vaccines and are, according to experts in the field, an experimental form of chemo-"therapy" and / or gene-"therapy".

All of this puts these "vaccines" on a par with medical experiments carried out in Auschwitz and elsewhere during the III Reich. Is there any real reason why Merkel and friends and their British, Canadian and American counterparts should receive any lesser punishment?

You can register for Karma Singh's newsletter here