Things are going seriously awry for the Bankers and their stooges.

Just like a rat can be quite vicious when it's cornered, they've cooked themselves up a plan which they hope will get them back on top and avoid many of them spending years in gaol.

I don't have much detail but the intelligence networks, especially the American, do and they have called up all military reservists with orders to prepare to support civil authority.

The word is that a coup is planned with the intent of arresting Donald Trump and Mike Pence and making them disappear. This is the "ersatz" for truth - every attempt that the Democrats have made to legally depose President Trump, even paying actors to "witness" things that never happened and CIA agents to whistleblow about things they've never seen or heard has failed. Even the two year long Mueller "investigation" failed to produce the slightest thread of wrong-doing other than by the Democrats. As daily more of the crimes perpetrated by Democrats come to light, gaol time for many of them seems unavoidable. The only way out is a violent coup.

Under American law, if neither the President nor Vice President are available for office then the speaker of the House of Representatives becomes the president pro-tem. At the moment, that would be Nancy Pelosi who has many times demonstrated her total disregard for truth and the rule of law. Her latest pronouncement is that President Trump must prove that he is innocent of all nefarious activity: She just has to make a wild accusation and if the President doesn't quickly prove that he's innocent, then he is guilty; she does not have to present any evidence at all.

She would first appoint Hilary Clinton as vice president and then resign making "The Evil Witch" dictatrix of America.

In Europe, they're pulling out all the stops in the attempt to prevent Brexit. In July, the banker stooge Theresa May was forced out of office and we now have a pro-Bexit Prime Minister in Boris Johnson.

Just this Tuesday, 8th October, Angela Merkel telephoned with him and told him that she would only permit Brexit if Northern Ireland were handed over to her!

They are using the Dark Moon energy on the 13th October to put their plans into operation and it is our intent to throw a large number of spanners into their works.

I don't, as yet, know the time(s) for the action itself. This will be notified on Saturday afternoon / evening or Sunday morning. As the Full Moon is late in the evening, European time, I expect that it will be later in the day.

After much deliberation I finally decided that the place to start is with your navel (also known as your belly button).

After about three days following your birth, when the remains of the umbilical cord have dried up and fallen off, no attention at all is paid to this most important organ. Many people have large problems caused by this neglect.

We must re-learn how to use it; it's not difficult, it just needs a little practice.

Following your birth, it is through here that you receive the nurturing Goddess Energy - precisely as much as you permit!

Many people, because of old emotional problems with their mother, have almost totally closed off this organ resulting in the entire abdomen being undernourished.

Let us first take a look at what lies behind the navel and see how this can affect your health both physically and emotionally.

Immediately behind your navel is your small intestine (Ilium if you prefer Latin). This is a sea in a tube in which the liquid contents have an amazing similarity to the primeval soup from which organic life on Earth emerged more than half a billion years ago. The closer it resembles this "soup", the more nutrients it will supply to your body. This is very much dependent upon your diet and correcting this to one appropriate for humans instead of profitable for phude processors will bring considerable benefits, including a large increase in intelligence. You can download a basic guide to human appropriate nutrition here.

Not only this, your small intestine is also the centre of your lymph system and your natural immunity.

So, a strong, well-balanced small intestine is going to bring a lot of benefits.

On the other hand, a weak small intestine will not only lead to a number of sometimes chronic illnesses involving the lymph system but will also engender feelings of powerlessness and having no authority or "right" to change anything in your life: Again this is a problem with the mother (occasionally also father) and is the cause of alcohol addiction. The mantra "recipe" for dissolving alcoholism is aimed at setting you free from these old victim patterns. (Click here and then scroll under to the first of the "Healing Handbooks".) 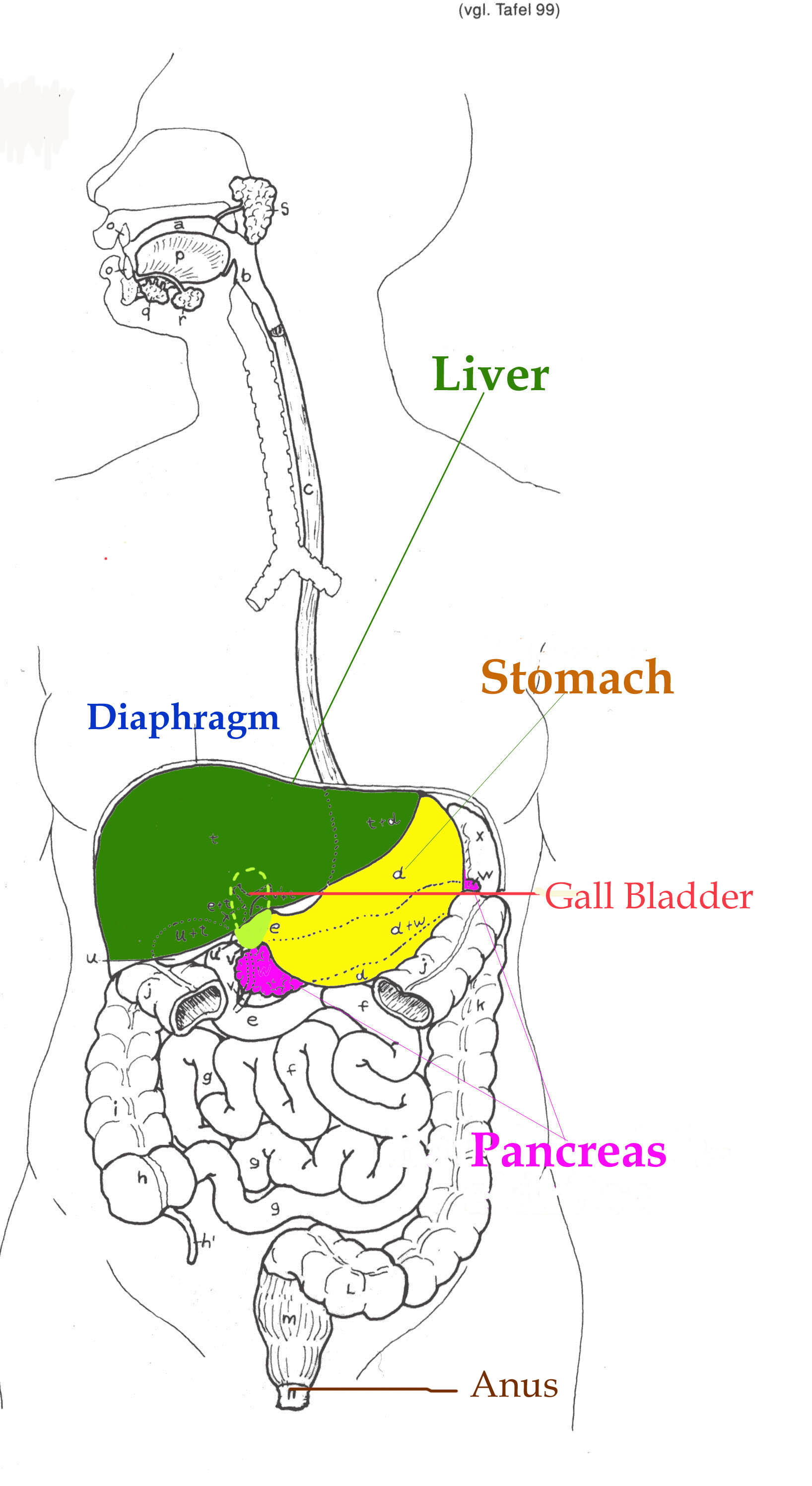 The colon is directly connected to every other organ of your body and each organ will notify the colon of its nutritional requirements. The colon then triggers your nervous system to give you a specific appetite for something which it knows from experience contains the needed nutrient(s).

This ability can, unfortunately, get perverted by addictive toxins and so one needs to know how to still this hunger with something which is not toxic (or, sometimes, less toxic). The "antidote" for heroin, for example, is massive amounts of Coca Cola (no other brand will do) and peas or chick peas. (Please note, I am not the expert on this - I just happen to know of this particular recipe from my work with heroin addicts some years ago.)

Saccharose (that which we call refined white sugar) will engender artificial feelings of helplessness and make you poor. (Rice syrup is a sweetener appropriate for the human body.)

So, having explained all this, what (apart from improving your diet) are we going to do?

Lying comfortably on your back, allow the feeling of love to flow through your navel and into your body.

Now, this is very important; you don't DO anything, you ALLOW the love to flow in. The love is always all around you; you just have to let it in to gain the benefits.

Despite what many priesthoods will tell you, you don't need to do anything to "deserve" love; you don't need to pay for the love in some manner. Love is simply the source of creation in which you have your existence. It is your free choice to be it or to deny it yourself.

So, lying on your back, let the love which always surrounds you flow through your navel into your body.

About 30 minutes per day will do a great deal and you can never do any harm by doing it for longer. Actually, your objective, through daily practice, is to make this a permanent state.

Those who already have their Light Pillar will also be able to set this up on "autopilot".

Some will experience a certain amount of intestinal detoxification. If this lasts for more than three days then you may need to replenish your electrolyte minerals with an Himalaya Sole and/or re-build your intestinal flora. You can usually get these in the form of dried spores in capsules from your local chemist (Am: drug store)

It's a good idea to do this first exercise for at least a month so the next step will come in November.