The Newsletter archive for 2015 is here

At the Congress for Frontier Science in Saarbrucken, Germany, on the 2nd and 3rd of May 2015, the very first meeting took place between these two giants of the re-creation of humanity’s way of life to one of peace, joy and abundance for all.

Michael is the man who has resurrected the ancient African way of community called “Ubuntu” and updated it for our world today.
Ubuntu is now not just a way of life but also a political party which has already made significant inroads in South Africa.

On Thursday 7th May, voters in Stoke on Trent and Sutton Coldfield can choose (respectively) Paul Toussaint and Mark Sleigh to represent their interests in Parliament.
Further details here:

There is also a book which can be downloaded from the Ubuntu website in which Michael has detailed much of the reasoning just why we need to make such a radical change and what we, as the people, can expect to gain from it.

Peter is the man who almost single handedly not only brought the Kingdom of Germany into existence but has time and again successfully defended it against attacks from the banking Cartel which, at present, rules our lives.

His success in establishing a bank owned and controlled by the people, a tax free and interest free currency, a health system which promotes health as opposed to giving our wealth to the pharmaceutical cartel and a retirement system which enhances the lives of the old instead of abandoning them is an example to us all.

These are all so well thought out and constructed that, in November 2014, the banking cartel made a last desperate attempt to stop him. Their actions upon that day went well into the area of criminal conspiracy, theft, kidnapping, fraud and much else. For these, they will, this year, answer before the courts - a last act in an unfolding drama of abuse of power, exploitation, corruption, theft, bribery and much else. The demon devours itself!

On Saturday, I had the great pleasure of introducing them to each other and helping to translate for them.

On Sunday afternoon we filmed this video discussion which I moderated.

Although Peter does speak some English and Michael a little German, I asked them, for clarity’s sake, to each speak in their mother tongue. 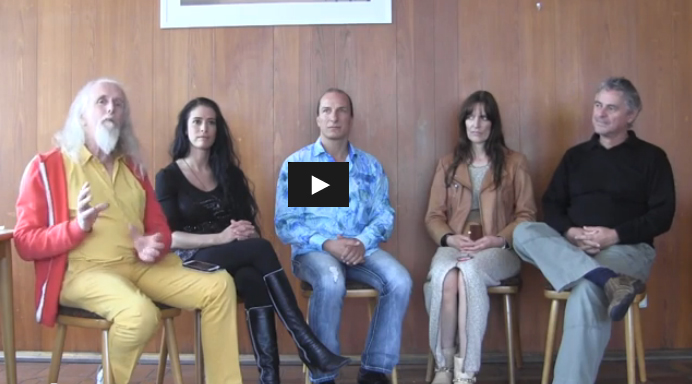 The meeting has given all of us new ideas and impetus with which to further the common task and I am certain that Michael and Peter will remain in contact; they can certainly call upon us at any time to translate.