The Science of Manifesting

The first thing that must be clear with this is that it is nothing new or “special” in any way but something which you have been doing every day of your life.

Because, however, you have never received any training in this skill, most of your manifesting has been self-destructive, i.e. you took on the habits and expectations of your family, your society, your country and your planet, you have continued to manifest those expectations on “auto-pilot” without ever once thinking about them.

YOU have created the world which you now have and are now experiencing in all details!

There are no exceptions to this.

Many “religious” teachings claim that this is not so; that you are more or less a puppet of “divine forces”. The truth, however, is that an ancient priesthood taught this with the precise intention to dissuade you from using your divine creative power. They taught this in order to create for themselves a “special status” in which they were the go-between who told you what God wants you to do. This is the origin of the system of exploitation which we saw in its ultimate form at the end of the last Age - the Age of Materialism and the patriarchy; i.e. rule by giant corporations all managed by the banking cartel - the largest and longest running fraud in human history.

In this new Age of Community, manifesting, i.e. consciously using your creative power to give yourself everything that you want is essential.

Dependency and all that it brings - poverty, dissatisfaction, frustration, strife, war, famine and exploitation are no longer needed. Mankind has learned this lesson and moves now into the next one.

In its simplest form, manifesting requires three attributes, all of which must be practiced simultaneously, i.e. outside of time.

The first is the stipulation:
This must be precisely what you want, expressed in the now form, may not contain any negations, explanations, justifications or suggest any sort of deal.

A good example which many could use would be -
“I now have at least 2000,- * fresh money for my free use in this and every month.”

The second is the vision:
You must “see” your command being fulfilled. Continuing with the same example, you must see 2000,-* being laid into your hands.

In the language example, your vision could be to give a speech to a group of people who are all native speakers of that language. They are all enthralled by your erudition and give you a standing ovation.

This picture is the language the universe understands and which will cause it to begin movement to fulfill your command.

The third part is the feeling(s) which your vision awakens in you:
In the money example, they should be Gratitude**, happiness and (maybe) relief.
In the language example, Gratitude, enthusiasm and joy.

It is the feelings which give power to your stipulation and make it into an irresistible command which the universe will follow.

I repeat, all three aspects must be present simultaneously - consecutively is useless.

The words and the vision with the feelings are to be sent from your heart (the human body’s transmitter) into the entire universe.

The book, “The Key to Luck” goes into this in great detail and is, in fact, the handbook giving you a step by step guide to unlimited manifesting.
The book, in both download e-book as well a printed book by air-mail versions, is only available here:

** Gratitude: a deliberately mis-taught word, for gratitude is truly the feeling you have when you let your creative power flow - it is the feeling of creation itself!

This is just one side of the coin - how to use your power creatively. What about the other side?

What about the years of enduring lack and insufficiency and dissatisfaction and destructive impulses that seem to come from nowhere?

This is the “programming” which you assimilated through your childhood years and is the expectations of your parents (mostly), your school teachers, your family and the neighbourhood in which you grew up. Added to this are the ancestral impulses which have been passed on to you generation by generation; you don’t know where they come from but they still rule your life and there doesn’t seem to be anything that you can do about them.

Forget about genetic determinism; I do know that this is still taught in schools and medical colleges as well as being portrayed on television as though it were the epitome of scientific knowledge ……..

The decades long “Human Genome Project” to map the human genetic structure brought this crashing to the ground when it showed that, of the approximately 240,000 genes which would be necessary to support the hypothesis that your genes determine your life, less than 22,000 actually exist!

Add to this the newer science of Epigenetics from the 1980’s which clearly shows that the genes are nothing other than a passive data base which your cells read and modify at will plus Quantum Biophysics, which first emerged in the 1990’s, and irrefutably demonstrates that it is the energy of consciousness, i.e. the REAL you, which shapes and controls your body. Then you see clearly that YOU have the free choice to do anything that you wish, anything at all, and all that you need to do is to finally learn how and to remove the old programming which has been pushing you in the opposite direction.

What started out as the successful completion of a project to discover the cause of snoring and to remove it from your life has unfolded itself into a very powerful tool to remove the destructive habit programming (both ancient and modern) from your life.

This, more powerful, version can only be made available on DVD - YouTube and similar simply cannot deliver the necessary quality and most people’s internet connection cannot download files in the Gigabyte size range. Additionally, a DVD cannot merely be played upon your computer but also, via a DVD player, on your television where you can enjoy the transmissions in full HD.

The transmissions (see this website for other examples) on the DVD itself are designed for a few minutes daily use (you don’t have to stare at the screen, just be in the same room) in four stages described in detail both on the website and in the handbook which comes with the DVD.

The programme can be viewed as a home therapy over many months which will remove not merely snoring and apnoea but many, many other problems from your life including the unconscious beliefs and expectations which cause lack, debt, rejection and much more that you never truly wanted.

Although the transmissions work primarily to correct the quantum biophysical functions of the pancreas and surrounding area, it is much too soon to say whether diabetes mellitus - type 1 diabetes (the so called type II isn’t diabetes at all!) - will be alleviated. It takes up to 2 years to re-build a wrecked pancreas and the DVD simply has not been available that long. The other benefits make this, however, an investment which will repay you handsomely. 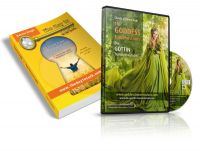 From today, Friday 28th October 2016 the printed book “The Key to Luck” together with the DVD “The Goddess Transmissions” are available in a combined package offer.

As this also makes an ideal Christmas present, the launch price is already at the Christmas Special price (select your country in the shopping cart to see the price which applies to you).

Additionally, if you choose to give more than one set for Christmas, you can get up to 20% discount on the special price - the more sets you order, the lower the price - all done automatically in the shopping cart.

Here are the order links:

For USA and Canada DVD in NTSC format in US$

For the United Kingdom DVD in PAL format in £ Sterling

For everywhere else DVD in PAL format in Euros

There are many people out there in the Wonderful Word of Online who have either the printed book or the DVD already and would like the other. Just send an email with the order number with which you purchased the printed book or DVD and the team will send you a personal link to order the other at the special price. Please use this email link only.

Is your home right for

Is your planned move
the right one for you?